Valmet to deliver a biomass based boiler plant to Nokianvirran Energia

Valmet will deliver a boiler plant that utilizes biomass to Nokianvirran Energia in Finland. Valmet announced the signing of a letter of intent for the delivery on November 25, 2014. Valmet's delivery will include a HYBEX boiler with a steam power of 68 megawatts (MW) that employs the fluidized bed technology, flue gas purification equipment, and the plant's electrification and automation system.

The boiler plant will be delivered for a new steam heat station to be built in Nokia. The total value of Nokianvirran Energia's investment is approximately EUR 45 million, of which the value of Valmet's delivery is slightly more than a half. The order is included in Valmet's first quarter 2015 orders received. 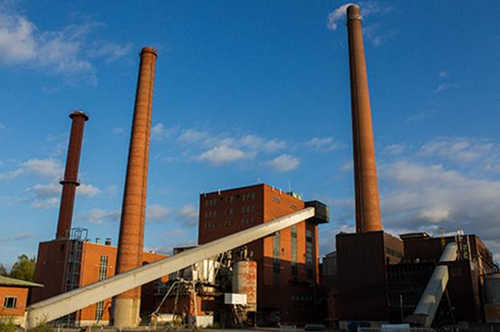 The new heating station will produce process steam for the SCA Hygiene Products paper mill and the Nokian Renkaat factory, as well as district heat for Leppäkosken Lämpö's district heat customers. The fossil natural gas previously used for energy production will be replaced with more affordable biofuels, such as timber chips and whole tree chips. In addition, the boiler can utilize milled peat and sludge from the paper mill.

Leppäkosken Lämpö distributes the district heat produced by the power plant to its customers through its network. "This investment will especially improve the price competitiveness of district heat compared with other heating methods," says Juha Koskinen, the managing director of Leppäkosken Lämpö.

For SCA, which manufactures tissue, the investment will decrease the company's dependence on fossil natural gas. In addition the de-inking sludge derived from the tissue mill can also be used for energy production at the new power plant.

For Nokian Renkaat, the power plant will bring cost benefits, and additionally reduces the greenhouse gas emissions of the production process.

Nokianvirran Energia Oy's current plant consists of two gas-fired boilers with a steam power of 57 and 110 MW. The new 68 MW plant to be constructed will be integrated with the existing power plant. As gas is replaced by biofuels, carbon dioxide emissions in the area will decrease by 60,000-80,000 tons per year.

Valmet has delivered several fluidized bed boilers of nearly the same capacity to district heating plants and industrial facilities. "Stricter emission standards and the need for using affordable bio and recycled fuels that are more demanding in terms of corrosion, present new challenges for the boiler design. The design work for Nokianvirran Energia's new boiler has mostly been completed, and the manufacturing has been started at Valmet's Lapua workshop. According to the project schedule, steam production will begin in the spring of 2016," says Jari Niemelä, Sales Director, EMEA, Valmet.

Nokianvirran Energia Oy is a joint venture of Oy SCA Hygiene Products Ab, Nokian Renkaat Oy and Leppäkosken Sähkö Oy which is constructing a steam heat station in Nokia to be integrated with the exiting power plant. Once completed, the plant will produce process steam and district heat to its owners and improve the competitiveness of the shareholders' business operations, ensuring more stable energy prices in the long term.

More in this category: « Valmet and Nokianvirran Energia sign a letter of intent regarding a boiler plant delivery to Nokia Emerson announces new energy management information system for real-time insight into energy performance »
back to top