Almere City FC has a burning ambition. This professional football club from Almere wants to win a place in the Dutch Premier league, the highest level attainable in the Netherlands, during the next 5 to 6 years. In anticipation, renovation work has been carried out at the stadium during the past few months. “That work also includes the washroom and sanitation equipment”, says Managing Director Raymond Groenteman. “We recently chose in favour of the very stylish range of Satino Black products, which are a perfect match for our lofty ambitions.” 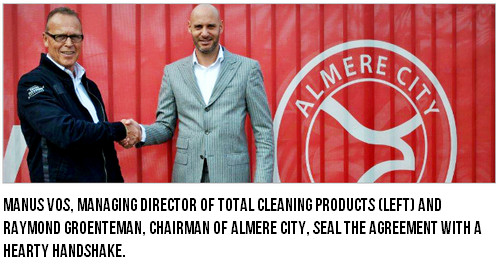 Almere City FC is currently being subjected to a facelift. The club collaborates closely with Ajax in terms of sporting development. Ajax sends young, promising players to Almere City where they can mature while playing in the Jupiler League. Trainer Fred Grim, who is also from Ajax, wants to use these players to help the club rise through the Leagues. Managing Director Raymond Groenteman: “When you acquire players like these, you need to ensure that they feel at home at a well equipped and friendly club. All your facilities have to be in perfect order and that includes the toilet areas.”

All the toilet areas in the main building were recently equipped with the complete range of Satino Black products; i.e. hygienic paper, hand soap, foam soap, toilet seat cleaner and dispensers. Raymond Groenteman: “It was the attractive design of the dispensers which swayed our decision in favour of Satino Black. Obviously, we also value the fact that Satino Black products are produced in a CO2-neutral process and don't leave harmful products behind in the environment.”

Manus Vos, the Managing Director of Total Cleaning Products, is the club's supplier. “Almere City FC is the first professional football club in the Netherlands to choose in favour of Satino Black and we are particularly proud of this achievement. In an organisation where you would expect all eyes to be focused on football, the club's directors are also concerned about style and appearances and that's not something you see every day. Professional football attracts a great deal of public interest and Satino Black is bound to benefit from that exposure. Almere City FC is working hard to achieve its ambitions; when the club scores, that's a goal for Satino Black as well. ”

Almere City not only applies the principles of Corporate Social Responsibility in its sustainability policy, but also in its charitable activities. The club is an ambassador for Stichting DON, a foundation that funds research into diabetes in the Netherlands, and the players all proudly wear DON's logo on their sleeve. Groenteman: “This was another project that we carefully selected. Diabetes is a silent killer. Hardly anybody is aware that the disease can kill you almost without warning. We wholeheartedly support this valuable project. We can safely say that Almere City FC is about much more than just football alone.”

More in this category: « Satino Black wins WWF Paper Award Outotec to deliver a 90 MW biomass power plant in Turkey »
back to top