Drenik renews its trust in Recard for the fourth time 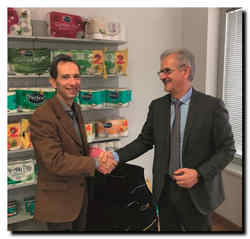 Drenik ND d.o.o., a company headquartered in Belgrade and very strong not only on the Serbian market but also in the Balkan and Eastern European territories, renews its trust in Recard for the fourth time with the order of PM3: a complete turnkey plant with a production capacity of 120 tpd.

The Crescent Former, in a 1850-mpm speed, 2850-mm format, will be fed by two stock preparation lines for virgin fibers and equipped with a hydraulic rewinder with 4 backstands, complete electrical plant, all ancillary equipment, DAF system, mist and dust extraction systems and hall and roof ventilation.

Recard thus confirms itself sole provider of PMs for the Serbian company. In 2004 it had installed PM1 for Drenik, later modified by Recard at the company’s request to increase its speed and production capacity and started up in February 2017, while in 2007 it manufactured PM2 for the company.

More in this category: « Pyroll and Stora Enso have agreed on the transfer of the ownership of the sheeting service business in Baienfurt, Germany Stora Enso to divest the Baienfurt sheeting centre »
back to top