Hardwood Chip Trade in the Pacific Rim in the 2Q/2020

The world’s two largest purchasers of wood chips China and Japan drastically reduced their chip importation in the 2Q/20. With the Covid-19 taking a toll on pulp and paper consumption in the two countries, demand for wood fiber was down substantially from the first quarter of the year.

Over the past seven years, Japan has consistently imported just over 2.5 million odmt of hardwood chips per quarter. This changed in the 2Q/20, when the import volume fell 18% q-o-q to slightly less than two million odmt, reports the Wood Resource Quarterly. In June this year, a record low of only 490,000 odmt arrived at Japanese ports, down 30% from the same month in 2019. Shipments from South Africa, Brazil and Vietnam declining the most. 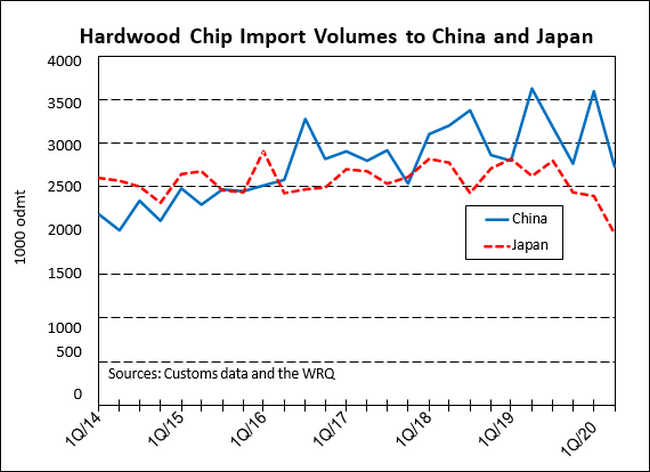 Although import volumes to Japan fell during the spring, import prices increased slightly in the 2Q/20, averaging $193/odmt, up from the 1Q/20 price of $191/odmt.

In the 2Q/20, the volumes of chip imported to China fell more q-o-q than they did in Japan. The decline was driven by two main causes: reduced pulp production in China, and an increase in the importation of market pulp at record low prices. These market pulp imports came as a substitute for domestically produced pulp. The import volume was down from 3.6 million odmt in the 1Q/20 to 2.7 million odmt in the 2Q/20, the lowest level in almost three years.

Most of the larger pulp mills in China rely almost exclusively on imported wood chips to supply their wood fiber needs. A closer look at the import data (by port) indicates that the pulp mills in the southern provinces of China, including the APP’s and Chenming’s plants, reduced imports of Eucalyptus chips the most from the 1Q/20 to the 2Q/20. This was also the region where chip import prices fell the most during the first half of 2020.

Interested in wood products market information from around the world? The Wood Resource Quarterly (WRQ) is a 67-page report, established in 1988 with subscribers in over 30 countries. The report tracks prices for saw log, pulpwood, lumber & pellets worldwide and reports on trade and wood market developments in most key regions around the world. For more insights on the latest international forest product market trends, please go to www.WoodPrices.com

More in this category: « Stora Enso’s remuneration policy ranked the best in Finland Södra to raise price of NBSK by USD 40 to USD 880/tonne »
back to top