Work begins on £25m Quay extention at Port of Tyne

The Port of Tyne has appointed the main contractor for the £25m extension of Riverside Quay, the Port’s multifunctional deep-sea facility at South Shields. 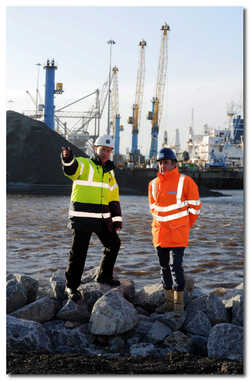 The main contract for over 300 metres of quay work includes a 125 metre quay extension, an upgrade of 118m of existing quay and 90m of quay wall renewal at the former McNulty site. The £18.6m contract was won by Tyneside-based Southbay Civil Engineering Ltd who will start construction this month.

This development is required to support the growth in cargo volumes being handled by the Port, including the relatively new wood pellet imports used by power stations as they convert from coal to renewable fuels.

Andrew Moffat, Port of Tyne Chief Executive Officer, said: “On the back of growth in volumes over the past few years we are investing in new infrastructure to make sure the Port is able to meet the needs of both our existing and our future customers. This is the biggest single investment we have made since we built Europe’s first purpose-built wood pellet facilities back in 2010 and it will significantly increase the Port’s capacity to handle increased volumes of cargoes. Extending the length of the quay will increase the berthing capacity by almost 20% enabling up to four large cargo ships to berth simultaneously.

“If we are successful in achieving our plans the added capacity provided by the extension of the quay would deliver new jobs and would add around £2 million to the regional Gross Value Added each year.

“I am delighted that a North East based company won the tender against international competition. The project itself could have a major impact in the region – during construction it will add £14.8 million to the local economy.”

Enabling work began in June last year with nearly £3m million invested in underwater preparatory works and internal roads built within the Port to reduce construction traffic outside and minimise disruption for nearby businesses and residents.

The project covers some 300 metres of quay, including the construction of a brand new 125 metre quay extension with a load capacity of 10 tonnes per square metre. A 118m section of existing quay which is over 70 years old will be removed, and the old fenders will be replaced with new before the quay itself can be laid. The renewal of 90m of quay wall at the former McNulty site also marks the start of investment to refurbish the site acquired by the Port in 2013.

In total 240 steel piles up to 33m long and weighing up to 21 tonne each will be needed to support the new quay and will be driven into the river bed over the course of the project.

Paul Stephenson, Managing Director of Southbay Civil Engineering Ltd, said: “We are pleased to have won this major contract on our doorstep and delighted that our specialist civil engineering skills are put to good use with our experienced local staff and labour. It is fantastic to be part of this project to bring the Port of Tyne the vital flexibility it needs to continue to win business, supporting jobs and the North East economy.”