Inapa creates brand song with sounds from the team and operations

Inapa, one of the leading paper merchants in Europe, launched today a new brand song, the first element of an audio branding project developed with the sound agency Índigo to celebrate the 50th anniversary of this Portuguese company founded in 1965.

To get a more authentic outcome, this “sonic identity” was created based on real sounds from Inapa operations. The technical team recorded dozens of sounds sourced directly from the company’s machines and equipment, like paper cutting machines, forklifts, warehouse robots, printers and packaging machineries, among others. These sounds were used as the pulse of the brand song, being its rhythmic basis. For the final output, the teams were invited to participate providing the voices and instrumental talent to the brand song. 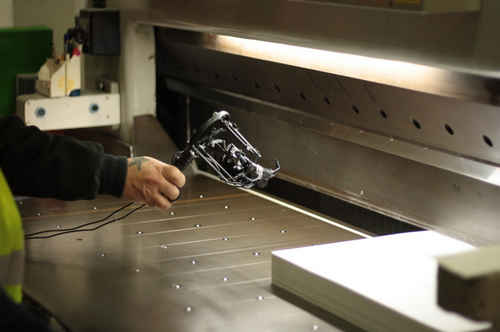 To achieve this result, the project started with the creation of a task force with team members from the different countries where Inapa operates. The goal was to guarantee the representation of different cultural visions in order to get to a solid sound approach  able to illustrate  Inapa’s values: client intimacy, commitment, excellence, leadership and sustainability.

In the second phase we analyzed different types of sounds and sound moods to evaluate how they represented the core values, reducing the aesthetical bias of music evaluation.

As the Group is in different geographies that speak several languages, the sonic identity has no lyrics but has a human element that reinforced the importance of people, team work, intimacy and commitment.

“Our activity is directly linked to our senses – textures, odors and vibrant colors – and the sound is an extension, connecting our teams at an emotional level, wherever they are”, states José Morgado, CEO of Inapa Group. “This project was an additional motivation to think about our positioning and core values and how we wanted to translate them into sound. In our 50th anniversary this is our way to honor the past, celebrate the present and, especially, inspire the future”.

About Inapa Group
Inapa is one of the leading paper merchants in Europe, with annual sales above 900 million Euros. Established in 1965, Inapa is the only paper and pulp Portuguese company with multinational operations being also the only listed company in the paper distribution sector in Europe.

With a team of 1500 employees, Inapa Group operates in 9 countries – Germany, France, Spain, Portugal, Switzerland, Belgium, Luxembourg, Turkey and Angola – holding a leading position in all these markets.

More in this category: « WWF´s “Environmental Self-check” –a free and confidential service for pulp and paper producers Valmet and Metsä Fibre finalized the order agreement for key technology to Äänekoski bioproduct mill »
back to top