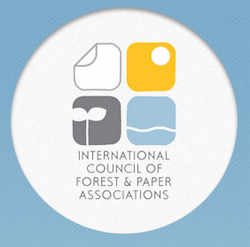 The International Council of Forest and Paper Associations (ICFPA) and its members welcome the signing of the landmark United Nations agreement to tackle climate change, set to take place on April 22. The agreement urges countries to implement policies that would allow them to keep a global temperature rise below 2 degrees Celsius. The global forest products industry has a highly significant role to play in the implementation of these targets.

“The global forest products industry has made significant strides in reducing its carbon footprint, stocking carbon, and generating greenhouse gas removals – all helping to mitigate climate change”, said ICFPA President and Brazilian Tree Industry (Ibà) President Elizabeth de Carvalhaes. “This agreement is crucial to implementing some of the policies that consider biomass as carbon neutral when harvested from sustainably managed forests and to further recognize all positive contributions that forests and forest products provide in combating climate change.”

The inherently-renewable global forest products industry remains committed to mitigating climate change for the benefit of the green economy and society at large. ICFPA members have achieved an impressive 5% reduction in their greenhouse gas emissions intensity since 2010/2011 and 17% since the 2004-2005 baseline year (2015 ICFPA Sustainability Progress Report).

The European pulp and paper industry has been a global champion in mitigating greenhouse gas emissions. It has set itself in 2011 a clear vision of becoming carbon neutral by 2050 and since then, taken concrete steps to reach that goal,” said Jori Ringman, Acting Director General of Confederation of European Paper Industries (CEPI). “Thanks to responsible sourcing practices and sustainable forest management, the forest area is growing in Europe by an area of over 1,500 football pitches per day. CEPI is pleased to see development in the same direction globally”, he added.

The forest industry’s significant role in mitigating climate change was highlighted in the ICFPA-commissioned report Analysis of Forest Contributions to the INDCs by acclaimed researcher Paulo Canaveira. Having looked at the contributions of forests in the national targets of ICFPA member countries (INDCs) and global mitigation effort from 2020 onwards, the report concludes that many countries identify forests and the land-use sector as relevant to policies and measures implemented to meet their targets. Reducing emissions from deforestation, but also sustainable forest management, afforestation and reforestation are commonly mentioned as key mitigation practices. In some developing countries, they even constitute the country’s main contributions.

Other climate change mitigation efforts of the global forest products industry include supporting national and regional climate policies and programs; investing in technologies with low carbon footprints and ones that improve carbon sequestration; and developing bio-based technologies to find innovative ways to use wood fiber and substitutes for goods traditionally made from fossil fuels.

The ICFPA represents more than 30 national and regional forest and paper associations around the world. Together, ICFPA members represent over 90 percent of global paper production and more than half of global wood production.

For more information about the global forest and paper industry, visit www.icfpa.org