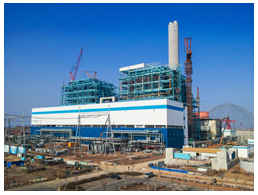 By investing in these large units with ultra-supercritical technologies, Jiangsu Huadian Jurong Power is supporting economic growth in Eastern China in an environmentally responsible way.

Both power plant units will be controlled with Metso’s automation systems from one central control room. The systems will monitor, control and optimize the performance of the units along with the common services at the plant site. The DCS is designed for both functional and physical distribution. The main function includes, for example, automatic startup and shutdown, performance monitoring and data links to other balance-of-plant systems.

In both main plant control systems, there are 33 pairs of digital processing units and approximately 14,000 hardwired I/Os. In addition, redundant gateways will transfer information from various systems or subsystems into the unit control systems. The common system is geographically distributed in the circulating water pump house, demineralization water pump house and auxiliary power equipment room, and controlled and interlocked through unit DCS operator stations.

More in this category: « Biomass plant on track to begin running in late 2013 ANDRITZ launches the TurboJet weir plate »
back to top